Here are a few examples of some quick drafts I recently made of blockprint art related to my new project, The Orchestra of the Moon.  Blockprint is a new art form to me, and the lettering is especially tricky, yet I kind of like the results.  It was fun to just start carving stuff on an old piece of wood and see what happened.  I now have a better idea of how I want the design and lettering to go together. 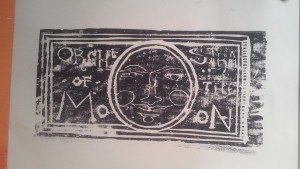 The horizontally oriented design was the first one (you can see the lettering was really scratchy and faint.)  Still, I think I like it the best, and will use it as the basis for another, more serious block in the near future.

The two vertically oriented images represent two different stages of carving on the same block; the face came first, and then I carved it out to just show a full moon.  The face was a little too goofy for me, whereas the face in the first block has a slightly benign, slightly eerie quality that I thought was nice for the Man in the Moon.

The Orchestra of the Moon is a Portland-based early music band,  which was started as the house orchestra for my puppet theatre, as well as to bring the joy of early music to audiences who might not otherwise be exposed to it, for example, the pub crowd.

This site uses Akismet to reduce spam. Learn how your comment data is processed.