The Orchestra of the Moon is a Portland-based early music band, which was started as the house orchestra for Rag on a Stick Theatre, to get people playing medieval music together, as well as to bring the joy of early music to audiences who might not otherwise be exposed to it, for example, the pub crowd.

You can check out web posts on this site and the website for Orchestra of the Moon.

Rag on a Stick Puppet Theatre is a puppet theater, usually with musical accompaniment.

You can check out web posts on this site for Rag on a Stick Theatre.

The charming town of Sherwood, Oregon, has for 62 years been the home of a civic celebration called Robin Hood Days.

On July 15th of this year, it also became to host to Orchestra of the Moon and the Breedlove Puppet Theatre, and the first-time collaboration of those two groups.

The band and the theatre joined forces for a production of “The Wicked Sacristan,” in which the orchestra played all the musical cues for the play.

This joining of musical and dramatic forces was the original concept of the puppet theatre, and many audience members commented on the “magical” quality that the large musical ensemble added to the play.

Notable, too,  was the contribution of Emma Rose, newest addition to the Breedlove Puppet Theatre, whose performance in the roles of Ydoin and the Miller were marvelled at by all, and whose general contributions to the smooth flow of the shows are unable to be expressed adequately here.  Many thanks!

And while thanks are being handed out, let’s also acknowledge Ben Neubauer for many contributions that day.

Great work, everyone, and

Puppeteers and musicians of the Rag on a Stick Theatre (Jacob Breedlove, Puppeteer, Aage Nielson and Laura Kuhlman, Musicians) were pleased to perform at the final festival of the summer season, September 24 and 25, 2016, in Carnation, Washington.

They performed the play “Why the Sea is Salt”, and also several sets of medieval music, to general acclaim.

Jacob Breedlove is now at work on another puppet play, an adaptation of the 15th century play “Everyman”.

The Rag on a Stick Theatre was joined by two members of the Orchestra of the Moon, Aage Nielson and Laura Kuhlman, April 30th and May 1st, in Carnation, Washington. Together they performed a revival of Why the Sea is Salt, a puppet play based on an ancient Scandinavian story about the use, and misuse, of technology.

The venue was the remarkable Camlann Medieval Village, a Living History Interpretive Center.

They also performed music  and played for dancers around the May Pole.

The program, minus the Maypole, will be performed again June 25 and 26. 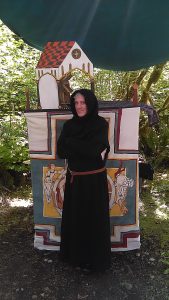 Here we see Brother Aage before the stage of Why the Sea is Salt.  Through the doorway you can see the mill.  The front of the stage is painted with an image of Dama Fortuna (not seen in this image) and the wheel of Fortune.  (Fortuna Rota).